Above the beach is Nestor‘s Cave and above this are the ruins of thirteenth-century Frankish castle (Old Navarino or Palaiokastro).[3] Overlooking the beach at the north eastern end is the tomb of Nestor’s son, Thrasymedes of the Mycenaean period (1680–1060 BC) with Neolithic finds at the same site showing occupation as early as 4000 BC.[4]

The beach is presumed to be Homer’s “sandy Pylos” where Telemachus was welcomed by King Nestor when searching for his father, Odysseus. According to myth, Nestor’s Cave is where Hermes hid the cattle stolen from Apollo.[5] 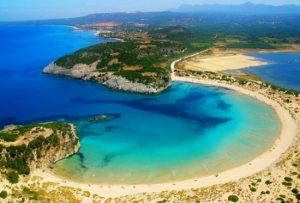 A hiking route begins from Voidokoilia. The climb towards Nestor’s Cave begins at the south-west end of the beach, while after the cave the route continues towards Paliokastro. Voidokilia is next to Petrohori in Messinia, Greece.[6] Though the ruins are not fenced off, the castle ruins are sign-posted as closed and tourists walk through the castle or around the walls at their own risk.

Gialova’s aquatic habitat, being an important stop for a variety of migratory birds, has been declared the southernmost Habitat of National Importance in the Balkans. It is considered a protected area hosting 258 species of birds out of which the 79 are included in the “Red Book” (species under threat of extinction). 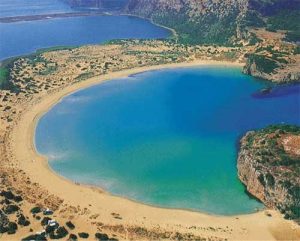 Parking for the beach is reached by sand tracks either from the Gialova Lagoon parking area (also used by bird-watchers) or by following the Northside route from Petrochori. The beach is considered friendly for naturists and gay tourists.[7]